Gallery » You Bet(ty) Your Life! 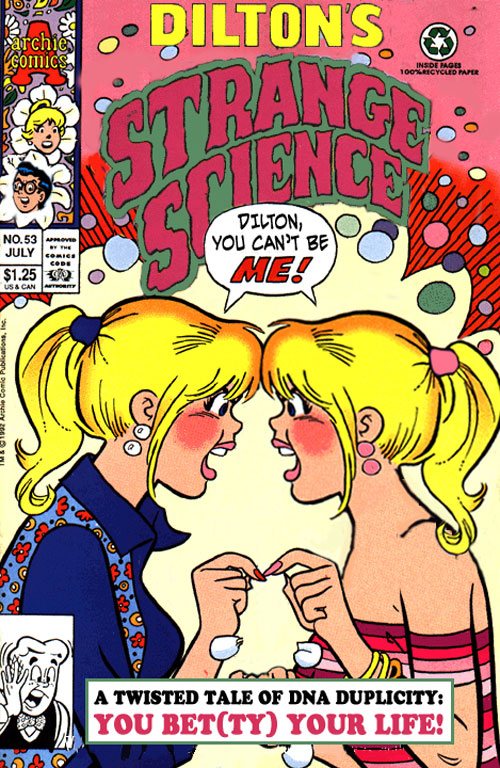 Dilton Doiley paced around his garage laboratory. He kept muttering two words over and over: “Darn it, darn it, DARN it.”

His latest invention, the Essence Extractor, sat in the corner of the lab unused. On first glance, the E.E. appeared like any ordinary ice cream dispenser, but in reality, it was meant to convert and solidify a person's individual essence into a liquid. Dilton believed that through the E.E., death itself could be cheated. A man or woman's physical attributes, personality, and even memories could be preserved forever.

But Dilton had run into a problem. He had attempted to extract his own essence through the machine more than once, only to fail utterly. Dilton speculated that he needed more than just a DNA sample from a person for the E.E. to work; he required some kind of physical object that represented that individual in every conceivable way. But how would he go about obtaining such an object?

Betty Cooper kicked the laundry machine with her sneakers. “Darn it, darn it, DARN it!”

Her mother called out from the kitchen. “Is something wrong, Betty?”

“It broke down yesterday,” Betty's Mom said. “Your father called for a repairman this morning. You'll just have to wait until it's fixed.”

“I CAN'T wait!” Betty thumped the washer with her fist. “I've got a date with Archie tonight, and none of my clothes are ready!”

“Well, you'll just have to use the clothes you're wearing right now,” Mrs. Cooper said in resignation.

Betty looked down at herself. “A pair of old jeans and a dinky sweater?! Are you kidding, Mom?!”

Mrs. Cooper's sigh could be heard all through the house. “Then why don't you take your laundry over to Dilton's down the street? I'm sure he'll be happy to help you out.”

Dilton was sitting in his favorite chair, staring at the Essence Extractor in helpless defeat, when the doorbell suddenly rang.

“Hang on, hang on…” Dilton grumbled. He left the garage and walked through his house, shoulders slumped with depression. Dilton opened the front door, and was startled to see Betty standing at the front step, holding a basket that contained a mountain of clothes.

“Hi, Dilton!” Betty chirped happily. “Do you think you could do me a big favor?

“Yeah, there is,” Betty said. “See, the laundry machine over in my place broke down, and I've gotta get my clothes washed before 6pm tonight. Is it okay if you could dump my stuff into your washer? I'm in a big hurry!”

Dilton was hesitant, but he couldn't turn a nice girl like Betty down. “Uh…sure…”

“Thanks!” Betty handed the basket over to Dilton, who almost collapsed under its weight. “I'll be back in a couple of hours. You're the best, Dilton!”

Betty turned and ran back towards her place, her sneakers thumping on the sidewalk, leaving Dilton awkwardly holding a great lump of women's clothes.

Dilton put the basket on the floor with a grunt before shutting the door. A light bulb suddenly went off in his head.

He sorted through Betty's clothes as respectfully as possible, although he still felt a little slimy about what he was doing. He soon found a pair of bright pink panties, decorated with tiny pictures of rainbows.

Dilton held up the underwear and smiled. This is exactly what he was looking for.

Leaving the basket in the hallway, Dilton retreated back into his laboratory.

Dilton gently dropped Betty's underwear through a small hole at the top of the Essence Extractor. To be sure, Dilton wasn't too proud about any of this. Even if this was all in the name of science, he still felt like some greasy pervert. But he would be finished soon enough, and then he would quickly return the panties back to the laundry basket as if nothing had ever happened.

The E.E. hummed and whirred, while Dilton watched with eager eyes and bated breath.

Dilton was devastated when the underwear plopped out from the bottom of the E.E. instead of the liquid essence he'd been hoping for.

“Terrific,” Dilton muttered as he approached the E.E. “Another potential breakthrough, right down the toilet.”

But then Dilton noticed something odd about Betty's panties. He couldn't quite put his finger on it. They seemed somehow…brighter. Pinker. Dilton could feel waves of pure, unfiltered femininity radiating from it as if he were close to a nuclear reactor.

Dilton blinked a few times, his head getting dizzy. A bizarre, indescribable urge was starting to seize him. He stripped off his lab uniform like a madman and snatched Betty's underwear off the table.

Before Dilton could stop himself, he had yanked the panties right up to his crotch.

Dilton's cheeks flared bright red. Now he really DID feel like a greasy pervert. If someone were to walk into the garage at that moment, he would have killed himself on the spot.

That's when Betty's panties suddenly gained a frightening life of their own. They hugged at Dilton's waist, almost like the tendrils of an octopus. Dilton felt a great pressure between his legs, like a hot pillow being pressed against his groin.

Dilton pulled open the front of the panties and peered down. His jaw dropped in shock. Instead of his male equipment, Dilton now had a small slit, above which a bushy patch of blonde pubic hair had sprouted.

It was a moment before Dilton could comprehend what he was seeing: A woman's vagina. But not just any vagina; it was the blonde, perky vagina of Betty Cooper!

Dilton frantically pulled off the underwear, even though a part of him already knew it was too late. He ran naked through the house towards the bathroom upstairs. Maybe a shower would wash Betty's essence from his body before it had a chance to completely take him over.

Once in the bathroom, he jumped into the tub and twisted the dials on the wall. His skin was already softening to a silky white complexion, and he could feel his rear end becoming pear-shaped. Even as the water cascaded over his body, Dilton was lost to the sensations overwhelming him. His Adam's Apple receded into his throat, while a pair of peppy breasts inflated outwards from his flat chest. His nipples became swollen and engorged as fresh milk filled his new mammary glands. Dilton's hair skewed from black to a bubbly blonde, as they swiftly lengthened and crept past his shoulders. As Betty's face began to emerge from his own, Dilton felt his own memories being disarranged and replaced by another, familiar identity. One name kept echoing in Dilton's head: Archie…Archie…Archie…Archie…

Betty blinked once or twice, momentarily bewildered to suddenly find herself in a shower. How did she get here? This wasn't even her bathroom. The last thing she remembered was undressing before pulling on her pajamas for bed.

She carefully pulled the shower curtain aside and looked at the window. The orange sunlight indicated that it was already late afternoon.

“Oh my Gosh!!” Betty cried, jumping out of the shower. “My date with Archie!! I've gotta get dressed!!”

Betty was frustrated when she couldn't find any decent-sized towels in the bathroom, forcing her to improvise. She wrapped one smaller towel around her waist, and another around her torso, before stepping out into the hallway.

“Hello?” She called out nervously. “Anybody around?”

Nobody answered. Betty tip-toed through the house. She started to recognize her surroundings.

“This is Dilton's place!” She mumbled under her breath. “How did I get in here? One of Dilton's crazy experiments?”

She made her way downstairs, and breathed a sigh of relief when she saw a basket full of her clothes beside the door. Betty had no clue what was going on, but at least she could get dressed in something besides a towel…

Betty - the original Betty - ran briskly towards Dilton's house. She hoped Dilton was finished with her clothes; she knew how absent-minded he could be sometimes.

She rang the doorbell impatiently. “Come on, Dilton, open up!” She called. “I need my stuff right now!”

The door swung open, revealing…Betty. Decked out in a different set of clothes, perhaps, but it was still as if Betty was looking into a mirror that had a life of its own.

The two Bettys regarded each other in mute astonishment.

“Who the heck are you?” Betty screamed.

“Who the heck are YOU?” The other Betty screamed.